Warning: This page contains major spoilers for the Chainsaw Man series. Please read at your own risk.

Devils (悪魔, Akuma or デビル, Debiru) are a race of supernatural creatures appearing throughout the World.

Devils are born in Hell. All Devils are born with a "name" that correlates with something that exists. Each name is unique to its respective Devil. Devils manifest according to the collective consciousness surrounding their names (for example: the Gun Devil appears to be constructed out of guns and has gun related abilities). They are the embodiment of the fear that "name" represents, so as long as that "name" instills fear, they incarnate. Devils that die in Hell reappear in the human world; Devils that die in the human world reappear in Hell; making them effectively immortal. Devils cannot recall any memories from their previous lives. According to the Angel Devil, him and the other Devils of Special Division 4 all remember the sound of the Chainsaw Devil's engine roaring before they died in Hell.[1]

The appearance and physiology of a devil varies from one to another as their shape and bodily structure are related to the "name" they embody. In general, they are formed from skin, blood, bones and internal organs such intestines. Despite different devils exist such as tomato, grape, sea cucumber, they usually contain human bodily parts such as limbs, eyes, fingers even though the name they represent do not possess such as bodily parts. Devils primary feed on the blood and fear of humans, however they can also survive by drinking the blood of other creatures (such as fiends and other devils), by consuming blood and fear they can quickly heal their injuries and become more powerful. For that reason, while devils and fiends can also consume other kinds of foods, such as vegetables and fruits, most of them refuse to just live off by consuming regular food, since it will not heal their wounds or give them more power. Devils also appear to be incapable of dying due to old age. Because of this, they can live forever for as long as they are not killed by external factors.

Naturally, most Devils are extremely hostile considering their requirements to feed on the blood and fear of humans. Some, however, are relatively friendly and feed by alternative means: Some Devils, such as the Fox Devil, choose to form contracts with humans, allowing humans to borrow some of their power in exchange for a sacrifice.[2] Other devils outright choose to become devil hunters, allowing them to live in human society and buy food with the money that they make. As a general guideline, the more human the devil looks, the more friendly they tend to behave. However it is worth noting that devils do not have human rights and therefore there is no legal repercussions if they are killed by a human. For that reason, some devils and fiends are coerced into helping humans out of fear of dying rather than doing it out of their own free will. Devil Hunters will sometimes capture devils to use them for contracts, the future devil is a good example.

While uncommon, it is possible for a human and a devil/fiend to form an emotional bound. In some rare cases it might even developed into a romantic relationship.

According to statistics, 7 out of every 20 Japanese citizens are killed by Devils.[3] It can be assumed that these statistics are somewhat similar in other countries, meaning the Devil's attacks are the leading cause of deaths around the globe. For that reason, being a Devil Hunter is considered one of the most profitable jobs in society. The average devil usually has a bounty of around 300 grand and their bodies can also be sold at the black market, with weaker devils, such as the Tomato Devil, being worth 400 grand.[4]

Devils possess supernatural abilities correlating with their name. The more fear is associated with a name, the more powerful the Devil who possesses it becomes.[5] The conditions and effects of each supernatural ability is unique to respective devil. Using these abilities usually consumes a portion of their blood.[6]

All Devils can consume blood of other creatures to heal their injuries, it is also implied that Devils can grow more powerful by consuming blood. While all Devils can consume blood to quickly regenerate, powerful Devils have shown to possess better regeneration.[7][8] Hybrids and other powerful Devils, such as the Gun Devil and Darkness Devil, have healing factors so potent that they are nigh-immortal. The flesh or blood of a devil can be feed to other creatures, making them stronger and even giving them the ability of the devil they’ve eaten, however this only works if the flesh/blood they ate came from a devil that is still alive as Denji did not get more powerful or gained the Control Devil’s ability, despite consuming Makima’s entire body.

Another ability common among all Devils is reincarnation: when a Devil dies, they reincarnate in hell; when they die in hell, they reincarnate on Earth. This ability makes them practically immortal. However every time they reincarnate, their memories and personalities are reset, making them completely different individuals from their previous incarnation.

Devils can also possess human corpses. This in most cases ends up creating a fiend, though in rare cases it can end up creating a Hybrid instead. 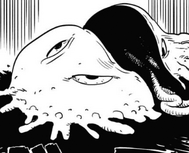 Devils are capable of taking over a human's corpse and turning into a Fiend. The personality of the fiend may mirror that of the corpse if the brain is still intact, as evident by the Violence Fiend's polite and gentle attitude.[10] In these scenarios, the devil may also retain some memories from the body they took over. In rare instances, devils deliberately would like to retain the personality of the possessed corpse, effectively reviving them, and take over their personalities from time to time. The only instance it is shown that when War Devil possessed the body of Asa Mitaka`s body.

Fiends are considerably less powerful than their devil counterparts and are able to use toned-down versions of their respective supernatural abilities. They can regenerate from drinking blood and get strength from it, but unlike hybrids, they can die if they are fatally wounded. Some fiends are able to transform into their devil forms temporarily. They are also unable to perform contracts unlike devils and humans.

In rare cases, a human can become fused with a devil and turn into a Hybrid. Hybrids have human consciousness and appearance, but can transform into a human-devil hybrid and manifest the supernatural abilities of the fused devil. The official name for hybrids was erased by the Chainsaw Devil, however hybrids continue to exist despite their erasure for unknown reasons.

Hybrids are able to transform into their hybrids forms by a bodily trigger. Their regenerative abilities are nigh-limitless and they can revive if there is an adequate amount of blood to consume.

There are eight known hybrids: Chainsaw, Katana, Bomb, Crossbow, Spear, Flamethrower, Longsword, and Whip. Besides Chainsaw, the others are collectively named as Weapon Humans (武器人間 Buki Ningen) by Makima.

Devils swallowed by the Chainsaw Devil

Light of a Star That Break Children's Minds Devil